Hosted by broadcaster and writer Kate Evans, key note speakers inspired participants with new ways of looking at Queensland’s involvement in the First World War, untold Anzac stories and the home front. Some of the discussions are presented. 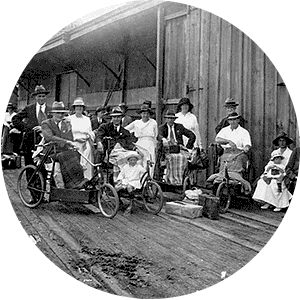 Returned soldiers on the wharf at Petrie Bight, Brisbane ca.1920. Negative No: 65592

Over three days, participants attended many hands-on workshops across a wide variety of topics:

Funding opportunities and the benefits of partnering  (PDF 917.7 KB)

Are you a local library, museum, historical society, archive or community group planning activities or interested in learning more about how you can participate in Q ANZAC 100: Memories for a New Generation? Subscribe to the Queensland memory enewsletter to keep up to date with this WWI commemoration project.